Roman blinds in square bay windows are a tricky proposition. The most obvious problem is that the folds of the side blinds will, without careful positioning, clash with those of the central blind when fully raised – and if you leave a gap between the blinds to counteract this, the chances are there will be window pane showing through the gap in the blinds.

Similarly, the side blinds will be at 90 degrees to the room, which can also give you privacy problems (or in bedrooms diminish the blackout effect of the blinds) because the gap between blind and window will be clearly visible as you walk into the room.

So we were keen to spell out these issues when we were approached before Christmas by a couple who had just recently moved house in Thames Ditton. Following a site technical measure we added to the mix the fact that the blinds were to be fixed inside a box pelmet constructed by the previous owners (which would exaggerate the gap issues mentioned above) and the fact that the ceiling of the bay dropped by 3cms from left to right – which was a particular concern as the fabric they had chosen had a pronounced damask pattern – which would need to be continued seamlessly around the bay – in spite of the drop difference. Oh, and the central blind was a hefty 2.8metres wide – which would raise both fabrication and operational issues! 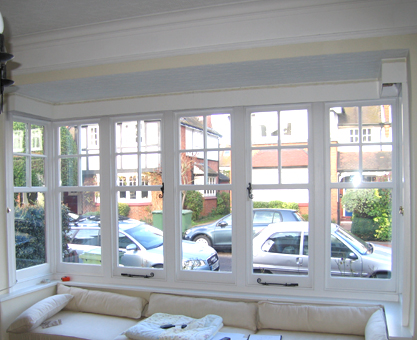 thereby ensuring 100% privacy (and also minimise draught) by virtue of there being a complete wall of fabric around the bay.

The light/privacy gap issue was potentially greater here without these measures because the three blinds would each be slightly set forward from their corresponding window by being fixed into an existing box pelmet (as pictured above).

Takling the 3cm difference in drop around the bay would require a little careful consideration. The issues here were two fold. Whilst the sills were level, the ceiling effectively raised by 3cms from right to left. If the central blind was simply fixed up into the ceiling, it would not hang parallel with the windows. Also, any variations in the drop of each blind might also effect what would need to be a seamless horizontal repeat of the damask pattern across the bay.

So we decided to make all three blinds to the smallest (right hand side) drop. Blocks with gradually increasing thickness would then be inserted above the central roman blind mechanism to make it horizontal. We advised that the central blind at 2.8metres wide would be difficult (or exhausting/painful!) to operate with a traditional cord and cleat mechanism, so we instead recommended an RBS chain driven headrail system from Evans Textiles (pictured below).

To minimise the gap between blind and window as you walk into the room we suggested traditional cord and cleat mechanisms for the two side blinds – as we could make these to just under 20mm depth (which is just under half the width of the chain driven system). As the drop on the left hand blind was 3cms deeper than the corresponding drop on the right hand blind, the left hand blind would be hung on a 6cm (as opposed to the more typical 3cm) deep batton, so that each blind could be hung at exactly the same distance from the sill.

Roman blind dowelling rods are typically only manufactured to 2.4metres wide, so we lengthened the roman blind rods for the central blind, to bring them up to the required 2.8metre width.

A three piece hardboard stiffened pelmet: wrapped in the same fabric as the roman blinds was attached by velcro to the existing box pelmet structure, with the distinctive damask pattern repeating horizontally across all three sections of the pelmet, and also tying in with the pattern of the blinds themselves.

The three roman blinds can be raised without their folds clashings as a result of careful placement of the central blind: